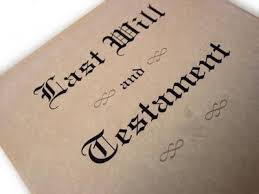 Note that the information appearing on this page applies to the State of Victoria, Australia.  The law relating to Wills in Australia is State based.

What is a Will:

A Will is a written, signed and witnessed document which expresses your wishes about how your assets will be distributed after your death.

Your executor has a legal obligation to promptly carry out the wishes in the Will.

What is an executor?

Your executor is the person or company you appoint to represent your estate.  The executor’s role is (amongst other things) to safeguard your assets, make funeral arrangements, pay any debts, finalise any taxation matters, and distribute assets according you your wishes.

Sometimes the executor must obtain probate (see below).

The most common executors by far are spouses and children.  But any person can be appointed – the person should be someone who you can trust to take on this role.  Executors are subject to very strict rules propriety.  If a suitable individual cannot be found a professional trustee company may be appointed (for example, Equity Trustees), but these companies will charge the estate fees.  Executors who are family members and other individuals won’t usually be entitled to any fees/commission.

Sometimes solicitors are appointed as executors, but this firm does not recommend this.

Executors do not need to see and/or read the Will prior to the death of the Will maker.

Once probate is granted, anyone can deal with the executor in the knowledge that that person is the proper legal representative of the estate.

It is not always necessary to obtain probate.  It is only necessary if some person or body holding an asset wants it to enable release of the asset.  For example, most banks will need to sight the probate if an account has a balance greater than $10,000.  If real estate is involved, unless it is jointly owned with someone, probate will always be required.

Note that banks will almost always release funds to pay funeral accounts without requiring probate (although they may require it later to release larger balances).

“Probate” of an estate without a Will can also be obtained – this is called Letters of Administration.

Capacity to make a Will:

For a Will to be valid a three pronged test must be satisfied.

The Will maker must know:

This test will not usually be necessary to consider for a younger healthy Will maker (we are obviously talking about the date when the Will was made), but often has critical importance for elderly people where capacity is often relevant, especially where some dementia or diminished capacity is known to be present.

It is possible for a person with dementia, or other incapacity, to make a valid Will, but an experienced solicitor should be involved to avoid challenges to validity after death.  It should also be noted that even if a medical practitioner has given an opinion that a person does not have capacity to make a Will, this is not determinative (for example, the doctor may have been asked the wrong questions or not been provided with the correct legal test for capacity).

The question of the capacity of an elderly person to make a Will is a special interest of this firm.

The formal requirements for a valid Will in Victoria are set out in the Wills Act.

There are also some “informal” requirements – for example, the same pen should be used by the Will maker and the two witness – this is not in the Wills Act but (if Probate is applied for) the Registrar of Probates will require evidence that the formal requirements about execution were carried out, if it is apparent that a different pen was used in signing and witnessing the Will.

It goes without saying that some Wills are simple and some are long and complex.

But there are some broad categories of Wills.

Husband and wife Wills – sometimes called mirror image Wills, and sometimes (wrongly from the legal point of view) “mutual Wills”.  These are basically the same Will with identical terms – usually making each other executor and leaving everything to each other, and then to children.

Mutual Wills – these are quite complex in concept and involve an agreement by both Will makers (usually husband and wife or partners) that the survivor will not to alter his or her Will.  This type of Will is often used in blended families where it is desired that step children will be properly benefitted where the step-child’s own parent dies first.

Wills with testamentary trusts – while most Wills have some form of simple and usually short term trust created in them, it is possible to set up a more complex trust arrangement which will commence only upon the death of the Will maker and which will be designed to have long term effect.  These are called testamentary trusts, and the full terms of the trust will be included as part of the Will.  These may be set up as, for example, family discretionary trusts.  Family discretionary trusts are often created to protect family wealth and can protect children from losing assets if they have financial or matrimonial difficulties or if a partner has gambling or business problems.

See our separate page on this topic which contains more detail.

Anyone in Victoria can challenge the Will of any person.   This extends to challenges to estates where there is no Will and the laws of intestacy don’t adequately benefit the challenger.

Although the legislation does not limit the persons who can challenge, in practice only close family members or persons with whom the deceased had a special relationship (financial or otherwise) are likely to succeed (in appropriate circumstances).

The challenging person must establish that the deceased had a moral duty to provide for him or her and did not adequately do so, or did not do so at all.

What if there is no Will:

Many people die without leaving a Will.

This is called an “intestacy”.

When this happens a person (usually the person who will be the major beneficiary) can apply for “Letters of Administration”.  This has the same effect as obtaining Probate – the appointed person becomes the legal representative of the deceased estate and can deal with the administration of the estate.

The appointed person will have a legal duty to distribute net assets according to the provisions of the formula set out in the relevant legislation (the Administration and Probate Act).  The formula provides that progressively more distant relatives will benefit in a particular way and in particular proportions, depending on which relatives exist.

The distribution of the estate in such a fashion may not be what the deceased wanted, and this is the primary reason why everyone should make a Will.

Solicitors often encounter unexpected misunderstandings about Wills.  Here are some (all of the below are true):

Changing address does not invalidate a Will.

The State does not take the assets of a deceased if there is no valid Will (the assets will go to close relatives according to a formula in legislation).

Husband and wife, for example, can’t have their Wills drawn in the same document – although this is probably strictly possible, if the formalities in the Wills Act are carried out, it is not something that should be done.

A Will won’t fail if there is no executor appointed or if the executor dies before the Will maker.

A Will won’t fail if a particular gift in the Will fails.

A person can have two Wills – this is sometimes done if the person has assets in two jurisdictions – for example, in Australia and the United Kingdom (but don’t try this at home!)

In Victoria a beneficiary in a Will can be a witness to that Will.

In Victoria an executor appointed in a Will can be a witness to that Will.

There is no such thing as the “reading of the Will” – there is no requirement for this – it is something out of Hollywood movies.

A “peppercorn” gift in a Will, that is, a gift of a negligible amount, will not disqualify the person receiving it from making a challenge to the Will.